Work should be done by Feb. 15; sediment will be disposed in Port Gardner 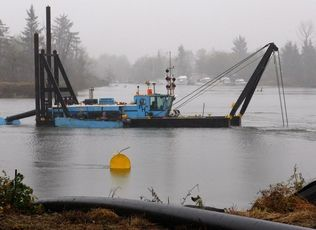 EVERETT — Another phase of dredging in the Snohomish River began Monday and is expected to be finished by Feb. 15.

The U.S. Army Corps of Engineers is paying $1.25 million to American Construction of Tacoma to do the work.

The federal agency has regularly dredged the channel six miles upriver from Port Gardner since 1910 to keep it safe for ships, spokesman William Dowell said. The Port of Everett has done other work on its own.

The work will be done with a clamshell-style shovel to scoop up and lift out material in various spots in the river to level them off, Dowell said.

In the fall, hydraulic machinery was used to suck out sediment in strategic locations in the river, including south of the I-5 bridge next to the Langus Riverfront Trail.

In December, hydraulic dredging also was done in an area between the Port of Everett Marina and Jetty Island, just south of the 10th Street Boat Launch, Dowell said.

Soil in areas targeting for dredging is tested, Dowell said. Clean soil from the next round of dredging will be deposited in Port Gardner in accordance with federal environmental procedures, he said.