Home shopping: Should you buy new?

It's official: After years of little activity, homebuilders are dusting off their jackhammers. 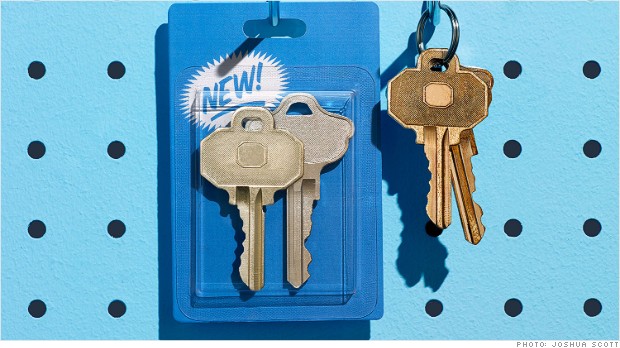 A newly-constructed home is likely to be priced 10% to 15% higher than an existing one.

Last year housing permits hit their highest level since 2008, according to the Census Bureau, and new-home sales grew 20% from the prior year.

"Builders are more optimistic than they have been for several years," says Patrick Newport, an economist at IHS Global Insight.

An untouched abode offers advantages, of course, such as a sleek modern layout and few repairs. Buying an existing home, however, may allow you to seal the deal faster and can offer better short-term price appreciation.

These head-to-head comparisons can help you decide which choice better fits your priorities.

All else being equal, new structures typically command 10% to 15% premiums over similar existing places. You're unlikely to be making an equal comparison, however.

"In most of the country the lots in the best locations are already gone," says David Brown, a Dallas-based housing consultant for Metrostudy. The newest homes are often built farther from centrally located areas and may have smaller yards than their older counterparts, so they can wind up costing less.

What you won't find in either place is the lavish incentives tossed to buyers during the bust; those have largely disappeared, says Brown.

When you're visiting prospective homes, check the numbers on both the lot size and the layout.

A spacious existing home that's overflowing with the current owners' stuff can look cramped, whereas builders use lots of tricks, such as putting in full beds instead of kings or queens and removing interior doors, to make a new home's space seem larger than it really is.

Most builders today are selling new homes from models, says Jody Kahn of John Burns Real Estate Consulting in Portsmouth, N.H. Once you agree to buy, the actual construction begins.

The upside: There are still lots of ways to personalize the home, such as adding extra storage or creating an office. But the finished product probably won't be ready for six to nine months, which can be tough for those who need to move in soon.

Timing the purchase is also a challenge when you're looking at a waiting period.

List your current pad when you agree to the new home and you risk selling too early; wait until your moving date nears and you could be stuck covering two mortgages until you find a buyer and close the deal, says Michael Corbett, author of Before You Buy.

Ask an agent how fast homes in your area are selling and, if necessary, discuss strategies to get yours sold more quickly.

After a few decades, roofs get leaky and boilers go bust. You'll spend an average of $18,000 on a new roof, according to Remodeling magazine, and $3,000 for a furnace.

New homes also carry lower utility bills. Energy use per house has fallen over the past decade in part thanks to changes to building energy codes, which call for more insulation and tighter sealing, and should fall further in new homes as more states adopt the latest 2012 codes.

While handy homeowners can reap the benefits of sweat equity, a new home offers very little room for improvements and is likely to sell for about the same price as others around it.

"New homes are for the most part based on a set of conforming architectural styles," says Corbett.

Prefer new? It can pay to buy into a development early, since builders usually raise prices as construction progresses (particularly if the homes prove popular). The risk is that there's no guarantee how the neighborhood will turn out.

Ask the builder how many homes in the development are under contract and how many are being bought by investors rather than primary buyers.

You'll pay more to heat or cool a six-year-old home vs. one built to the latest energy codes.
NOTES: Estimated costs for cooling in the South and heating elsewhere. Most states have not yet adopted the 2012 codes. SOURCE: Department of Energy
First Published: March 14, 2013: 6:17 AM ET
Related Articles
Economic News Spring Real Estate Roundup
Economic News A Snapshot of Homebuyers
Economic News Where will Mortgage Rates be Headed in 2015? by The KCM Crew on January 6, 2015 in Interest Rates We finished 2014 with the 30 year fixed mortgage rate at 3.87% as per Freddie Mac. This is very close to the historic lows in the spring of 2013. However, the Mortgage Bankers Association projects mortgage rates to be about 5% by the end of 2015. The website Investopedia agrees and gives some perspective […]